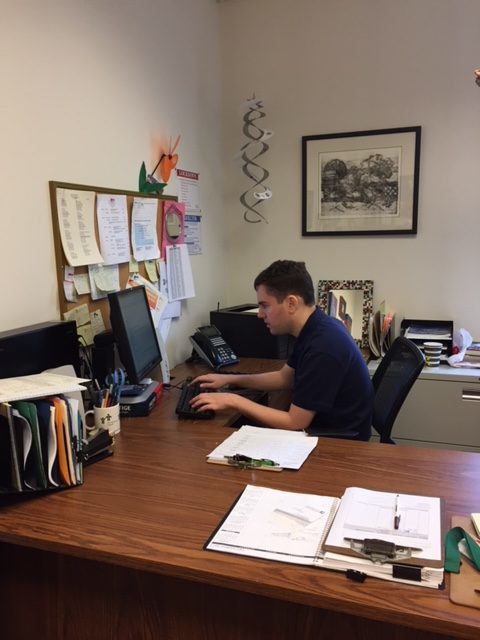 Finding A Job That Is Good

Scott, age 30, is working two jobs and living independently. Yet, to get to this place, he and his family have had to weather many ups and downs. Scott has significant Autism and when he was younger, his family was not sure what his future might hold.

Living in Bethesda, Scott went through the Montgomery County Public School system and completed Wootton High School. As he progressed through school, it became apparent that the environment was too expansive and overwhelming for Scott. Scott began to participate in more learning activities outside of school, going to class for a few hours and then riding the Metrobus to a part time job where he could gain valuable employment skills.

Scott loves computers and his speech pathologist was able to find him a job at an accounting office. There, Scott created templates and did data entry. Scott’s family and employer were surprised to find he never made any mistakes.  He excelled at these very detailed and specific tasks which took his full attention.

After graduating from high school, Scott began receiving support from SEEC, a nonprofit provider of community and employment services for people with disabilities. Through SEEC, Scott started Project SEARCH the first year it began in the county. Project SEARCH is a one-year school-to-work transition program designed for young adults with developmental disabilities who are either in their last year of high school or are recent graduates. The program consists of group learning classes and on the job work experiences. Scott was enrolled in Project SEARCH from September until February, but then he began exhibiting negative behaviors at the program including biting his supervisor. Scott made it clear that he did not function optimally in a group learning environment and he was most comfortable in a work space where he could focus completely on his task. Scott’s Direct Support Professional from SEEC, Chris, continued to work with him and better define opportunities which provided the chance for Scott to excel. Supported by SEEC’s Workforce Development team, Scott secured a job at a lawyer’s office three hours a day, three days a week. The lawyer had boxes stacked high in his garage and Scott scanned it all, undeterred by the magnitude of the job.

Scott and his family knew the right environment was the key to his success. As part of the Discoveries process, a team at SEEC brainstormed opportunities with Scott based on his skills, interests, and past accomplishments. Discoveries is a person centered planning process that involves getting to know a person before supporting them in developing a plan for employment. The team, along with Scott, came up with a way for him to capitalize on his strengths by starting a business scanning photos and enabling people to digitize their print memories. The team created a flyer and began to spread the word. Now, Scott almost always has a job to do. Plus, he even started digitizing music sheets for a concert pianist and uploading the files to an iPad so that it’s easy to flip the pages. He loves working at home two days per week.

In addition to his own business, Scott is now employed in the community at Ivymount Outreach Services, Inc. three days per week doing office work including scanning, copying, and other administrative tasks. This mix of community-based employment and at home self-employment works for Scott and allows him to be successfully employed and support himself on his own terms. Scott’s mom says what she loves about his work is that he’s able to do it independently. “After all,” she says, “our job is to support the child and then to back away and let the adult be as independent as possible.”

“Customized Employment is a process by which we support a person with disabilities as they identify their strengths as well as work with employers to consider their staffing needs. This helps ensure the best opportunity for success on both ends,” said Karen Lee, SEEC’s Executive Director. “Customized employment, however, is not a linear process. It is always evolving as the person changes; the team learns more about the person’s skills; and the needs of the employer develop. SEEC and other support providers understand this.”

Scott is thriving on the consistency and loves living and working independently. Scott’s mom lives nearby and sees Scott regularly. She continues to be his strongest advocate and is extremely proud of her son and all that he has accomplished. When asked about his work, Scott smiles and says, “Good”. After all, a home of our own and a job that is good is all most of us really want.

Call your Senator or Congressperson to express your support for The Transformation to Competitive
Employment Act (H.R.873/S.260). To find out the names and contact information for your representative, click HERE.

For press inquiries contact Carrie McGraw at 301.576.9000 or cmcgraw@seeconline.org